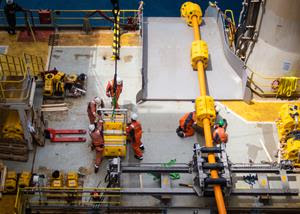 Engineers prepare to deploy the flexible jumper hose over the side of the Hidden Gem, before connecting it to the base of the riser. 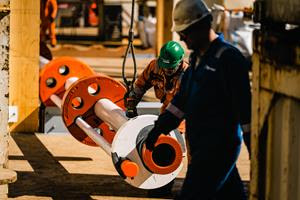 Engineers inspect a section of the riser pipe aboard the Hidden Gem.

Engineers aboard the Hidden Gem vessel deployed the flexible jumper hose, connected it to the base of the riser and then launched the pilot riser, lowering the assembly to a depth of around 650m meters. Using the remotely operated vehicle (ROV) installed on the Hidden Gem, engineers then made a sub-sea connection between the jumper hose and collector vehicle which was previously deployed to the seafloor in 745m water depth. Allseas used the derrick onboard the former drillship for at-sea construction of the pilot riser system which will ultimately extend to 4km deep when deployed later this year in the Clarion Clipperton Zone (CCZ) of the Pacific Ocean. 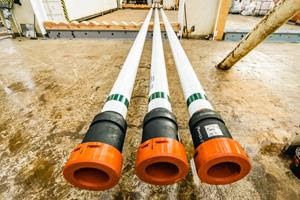 Individual sections of the riser pipe await assembly aboard the Hidden Gem.

The pilot system being tested by Allseas will be the basis for TMC’s first commercial production system, and in March the companies announced a non-binding term sheet outlining the terms for developing and operating the world’s first commercial system to collect deep-sea polymetallic nodules to meet surging demand for critical battery metals.

“Straight off the back of our collector trials, Allseas have once again shown why nobody else in the offshore business can think as big, or move as fast,” said Gerard Barron, CEO & Chairman of The Metals Company. “With the first deep-water deployment of the riser system and subsea connection between the collector and the riser successfully under our belts, we look forward to applying the lessons learned as we hook up and deploy the prototype collection system in the Pacific later this year.” 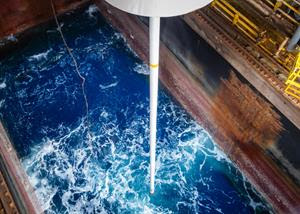 Allseas used the derrick onboard the former drillship for at-sea construction of the pilot riser system which will ultimately extend to 4km deep when deployed later this year in the Clarion Clipperton Zone (CCZ) of the Pacific Ocean.

Since 2019, Allseas and TMC have been working together to develop a pilot system to responsibly collect unattached polymetallic nodules from the seafloor and lift them to the surface for transportation to shore. Nodules contain high grades of nickel, manganese, copper and cobalt — key metals required for building electric vehicle batteries and renewable energy technologies.

Previously, TMC and Allseas announced successful trials of the nodule collector vehicle in deep-water in the Atlantic [see video] as well as harbor wet-test commissioning and shallow-water drive tests in the North Sea. All trials to date are in preparation for full pilot nodule collection system trials later this year over an 8 km2 section of the NORI-D contract area in the Clarion Clipperton Zone of the Pacific Ocean. The trials are an integral part of the International Seabed Authority’s regulatory and permitting process and the environmental impact data collected both during and after the upcoming nodule collection test work, together with many terabytes of existing baseline data collected by TMC, will form the basis of the application for an exploitation contract by its wholly-owned subsidiary, Nauru Ocean Resources, Inc. (NORI).

Development of technologies to collect polymetallic nodules first began in the 1970s when oil, gas and mining majors including Shell, Rio Tinto (Kennecott) and Sumitomo successfully conducted pilot test work in the CCZ, collecting over ten thousand tons of nodules. In the decades since, the ISA was established to develop the regulatory framework to govern mineral extraction in the high seas while technology development efforts have largely focused on scaling proven nodule collection technologies and optimizing for minimal seafloor disturbance and environmental impact.

About The Metals Company

TMC the metals company Inc. (The Metals Company) is an explorer of lower-impact battery metals from seafloor polymetallic nodules, on a dual mission: (1) supply metals for the clean energy transition with the least possible negative environmental and social impact and (2) accelerate the transition to a circular metal economy. The company through its subsidiaries holds exploration rights to three polymetallic nodule contract areas in the Clarion Clipperton Zone of the Pacific Ocean regulated by the International Seabed Authority and sponsored by the governments of Nauru, Kiribati and the Kingdom of Tonga. More information is available at www.metals.co.

About Allseas
Allseas is a world-leading contractor in the offshore energy market, with dynamism, rapid progress and pioneering spirit at its core. Allseas specialise in offshore pipeline installation, heavy lift and subsea construction. The company employs over 4000 people worldwide and operates a versatile fleet of specialised heavy-lift, pipelay and support vessels, designed and developed in-house. More information about Allseas is available at www.allseas.com.

Certain statements made in this press release are not historical facts but are forward-looking statements for purposes of the safe harbor provisions under The Private Securities Litigation Reform Act of 1995. Forward-looking statements generally are accompanied by words such as “believe,” “may,” “will,” “estimate,” “continue,” “anticipate,” “intend,” “expect,” “should,” “would,” “plan,” “predict,” “potential,” “seem,” “seek,” “future,” “outlook” and similar expressions that predict or indicate future events or trends or that are not statements of historical matters, including related to upcoming trials in TMC’s NORI-D contract area and future offshore operations. These forward-looking statements involve significant risks and uncertainties that could cause the actual results to differ materially from those discussed in the forward-looking statements. Most of these factors are outside TMC’s control and are difficult to predict. Factors that may cause such differences include, but are not limited to: Allseas ability to conduct a full pilot nodule collection trial in the Clarion Clipperton Zone; TMC’s ability to enter into definitive agreement(s) with Allseas with respect to the proposed strategic alliance to develop and operate a commercial collection system on terms and conditionals substantially similar to those set forth in the non-binding terms sheet; the successful completion of the pilot collection tests; TMC’s ability to obtain exploitation contracts for its areas in the CCZ; regulatory uncertainties and the impact of government regulation and political instability on TMC’s resource activities; changes to any of the laws, rules, regulations or policies to which TMC is subject; the impact of extensive and costly environmental requirements on TMC’s operations; environmental liabilities; the impact of polymetallic nodule collection on biodiversity in the CCZ and recovery rates of impacted ecosystems; TMC’s ability to develop minerals in sufficient grade or quantities to justify commercial operations; the lack of development of seafloor polymetallic nodule deposit; uncertainty in the estimates for mineral resource calculations from certain contract areas and for the grade and quality of polymetallic nodule deposits; risks associated with natural hazards; uncertainty with respect to the specialized treatment and processing of polymetallic nodules that TMC may recover; risks associated with collective, development and processing operations; fluctuations in transportation costs; testing and manufacturing of equipment; risks associated with TMC’s limited operating history; the impact of the COVID-19 pandemic; risks associated with TMC’s intellectual property; and other risks and uncertainties, including those under Item 1A “Risk Factors” in TMC’s Annual Report on Form 10-K for the quarter ended December 31, 2021, filed by TMC with the Securities and Exchange Commission (“SEC”) on March 25, 2022, and in TMC’s other future filings with the SEC. TMC cautions that the foregoing list of factors is not exclusive. TMC cautions readers not to place undue reliance upon any forward-looking statements, which speak only as of the date made. TMC does not undertake or accept any obligation or undertaking to release publicly any updates or revisions to any forward-looking statements to reflect any change in its expectations or any change in events, conditions, or circumstances on which any such statement is based except as required by law.

Photos accompanying this announcement are available at: