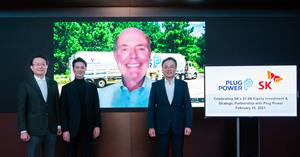 Plug Power and SK Group announce the completion of the $1.6 billion capital investment to partner in accelerating hydrogen as an alternative energy source in Asian markets.

– SK and Plug Power had a virtual signing ceremony, setting the stage for successful joint projects to come including forming a JV

– Through a JV in Asia, the two companies are set to establish a fuel cell factory and accelerate the expansion into Asian markets including China

LATHAM, N.Y., Feb. 25, 2021 (GLOBE NEWSWIRE) — Plug Power Inc. (NASDAQ: PLUG), a leading provider of turnkey hydrogen solutions building the global green hydrogen economy, and SK Group, one of the leading South Korean business groups, announce the completion of the $1.6 billion capital investment to partner in accelerating hydrogen as an alternative energy source in Asian markets. In celebration of kicking off the new partnership, including a plan to form a joint venture company in Asia, the executives of SK and Plug Power had a virtual deal closing ceremony on the 24th.

The companies previously announced entering into a definitive agreement in connection with the investment on January 6, 2021. SK Group brings significant presence and leadership throughout the Asia’s energy industry and a commitment to a sustainable future. Plug Power provides our global leadership in hydrogen fuel cell systems, fueling stations and green hydrogen generation. This partnership represents a powerful team to accelerate the growth of the hydrogen economy in Asian markets.

In January 2019, the South Korea government announced the Hydrogen Economy Roadmap through 2040, with ambitious goals, including: over 5MM tons of hydrogen per year, over 6MM fuel cell EVs, 1,200 refilling stations and 15 GW of fuel cell power generation, and expects the cumulative economic value of its hydrogen economy to reach ~$40 billion by 2040. Plug Power has proven its ability to scale a hydrogen business in North America as a global leader in the hydrogen economy. The opportunity to partner with SK presents an attractive and timely opportunity to establish a foothold in this market with one of South Korea’s leading industrial conglomerates.

SK Group, the third largest conglomerate in South Korea with its largest businesses primarily involved in energy industries, is committed to build sustainable green energy value chains in Korea and Asian markets. As such, SK Group is a highly attractive strategic capital investor for Plug Power’s established strategy for building out the hydrogen economy and accelerating expansion into Asian markets.

Going forward, SK and Plug Power are set to form a joint venture company to build the hydrogen ecosystem in Korea and jointly make inroads into Asian markets. The goal of the Asia JV is to establish a gigafactory in Korea by 2023 to produce fuel cells and electrolyzers, and later provide them in broader Asian markets with a substantial cost reduction.

SK Group owns approximately 9.6% of the issued and outstanding shares of Plug Power’s common stock immediately following the investment. This investment represents the largest U.S. clean energy PIPE in the last 20 years (based on the PrivateRaise PIPE database for transactions that have closed and includes common stock, preferred stock, convertible preferred stock and convertible debt).

Plug Power is building the hydrogen economy as the leading provider of comprehensive hydrogen fuel cell turnkey solutions. The Company’s innovative technology powers electric motors with hydrogen fuel cells amid an ongoing paradigm shift in the power, energy, and transportation industries to address climate change and energy security, while meeting sustainability goals. Plug Power created the first commercially viable market for hydrogen fuel cell technology. As a result, the Company has deployed over 40,000 fuel cell systems for e-mobility, more than anyone else in the world, and has become the largest buyer of liquid hydrogen, having built and operated a hydrogen highway across North America. Plug Power delivers a significant value proposition to end-customers, including meaningful environmental benefits, efficiency gains, fast fueling, and lower operational costs. Plug Power’s vertically-integrated GenKey solution ties together all critical elements to power, fuel, and provide service to customers such as Amazon, BMW, The Southern Company, Carrefour, and Walmart. The Company is now leveraging its know-how, modular product architecture and foundational customers to rapidly expand into other key markets including zero-emission on-road vehicles, robotics, and data centers. Learn more at www.plugpower.com.

Safe Harbor Statement
This communication contains “forward-looking statements” within the meaning of the Private Securities Litigation Reform Act of 1995 that involve significant risks and uncertainties about Plug Power Inc.(“PLUG”), including but not limited to statements about PLUG’s expectations regarding the success of the strategic partnership with SK Holdings, including the alliance and opportunities in the Asian market, the opportunity to establish a foothold in the hydrogen economy, and the growth and expansion of the hydrogen economy in Asian markets. You are cautioned that such statements should not be read as a guarantee of future performance or results, and will not necessarily be accurate indications of the times that, or by which, such performance or results will have been achieved. Such statements are subject to risks and uncertainties that could cause actual performance or results to differ materially from those expressed in these statements. For a further description of the risks and uncertainties that could cause actual results to differ from those expressed in these forward-looking statements, as well as risks relating to the business of PLUG in general, see PLUG’s public filings with the Securities and Exchange Commission, including the “Risk Factors” section of PLUG’s Annual Report on Form 10-K for the year ended December 31, 2019 and Quarterly Reports on Form 10-Q for the quarters ended March 31, 2020, June 30, 2020 and September 30, 2020. Readers are cautioned not to place undue reliance on these forward-looking statements. The forward-looking statements are made as of the date hereof, and PLUG undertakes no obligation to update such statements as a result of new information.

A photo accompanying this announcement is available at https://www.globenewswire.com/NewsRoom/AttachmentNg/be393b7c-3425-4a75-8492-e322b3b85b8c